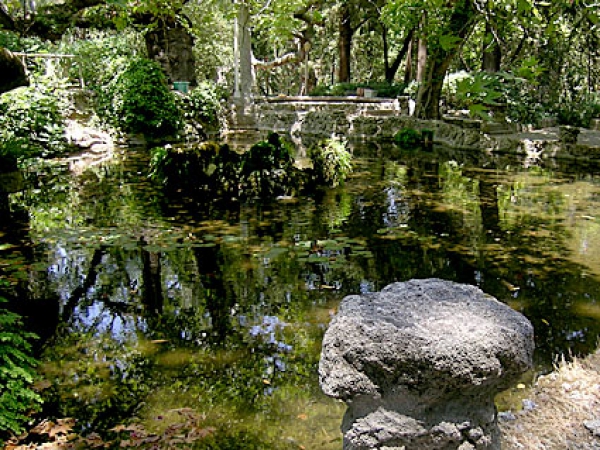 Along the road to Lindos , just three kilometers from the town of Rhodes , is an earthly paradise , the Rodini Park . It is perhaps the oldest park in the world , a small valley full of oleanders , shady trees , streams and cool green ponds full of water lilies , which cross bridges.

The idyllic scene - which we hand to cross by car but is clearly preferable to the wonderful walking trails - fill a garden with roses , and as a small zoo , where visitors can admire the famous deer of Rhodes . Moreover peacocks , moving freely within the area of the Park Rodini give an impressive and exotic touch .

According to legend Rodini Park was in antiquity the School of Oratory Aeschines , who had studied in great orators of antiquity , including Cicero and Julius Caesar .

Rodini Park can be seen as a part of the water system of the ancient city of Rhodes while over the park, to position Peukakia , we find pieces of the ancient necropolis ( 4th-3rd century BC ) , who arrives to Phaneromeni and Karakonero . In ancient necropolis will meet atmospherically lit , carved on rocks , tombs or mounds of the Hellenistic period , with carved representations as Dionysian and an impressively large tomb carved into the rock with a side length of 27.80 meters, called the Tomb of the Ptolemies and according to legend was dedicated to Ptolemy the First . On each side of the world 21 imistilia Doric . The Tomb of the Ptolemies restored in 1924 during the Italian occupation .

Inside the park , the Municipality of Rhodes operates and refreshment while remodeling projects that are underway are intended to give it its original form as a park and recreational area ..

Tweet
More in this category: « Rhodes Aquarium Acropolis of Lindos »
back to top