Palace of the Grand Magistros 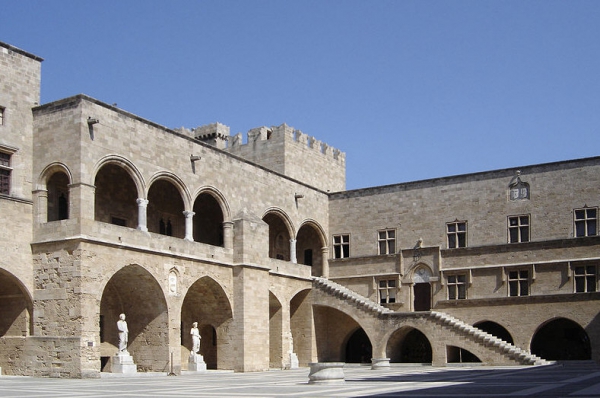 The Palace of the Grand Master of the Knights or Castelo is located in the northwest part of the medieval city of Rhodes on the highest point of the castle and is perhaps the most important monument of the period of the Knights .

Construction of the Knights

The Grand Master's Palace built in the 14th century built by the Knights Hospitaller , who occupied Rhodes and some other islands such as Kastelorizo ​​from 1309 to 1522 , the site of an earlier Byzantine citadel of the 7th century AD . The palace than administrative center and residence of the Knights of the Grand Master was also headquarters of the ruling social and intellectual class of Rhodes .

When the island was conquered by the Ottomans used the palace as a fortress , prison and administration center while in 1856 after explosion of munitions were stored in the basement of a partially damaged .

When the 1912 Rhodes came to the Kingdom of Italy , Italians repaired the track was destroyed in 1937-1940 under the supervision of the Italian governor of the Dodecanese de Bekkos , making the headquarters of each Italian governor of the island and the summer residence of King Victor Emmanuel III and later of Benito Mussolini , whose name is still a huge slab near the entrance .

After the annexation of the Dodecanese to Greece in 1948, the first floor of the palace was converted by the Greek authorities museum containing various artistic creations , folk art from antiquity and medieval weapons , medieval tombstones , jewelry , books , paintings , statues and other finds and generally the whole building is the biggest tourist attraction in the medieval city of Rhodes .

Tweet
More in this category: « Medieval city of Rhodes Archaeological Museum of Rhodes »
back to top